Ten years ago I was a metrosexual. I lived in a huge city, worked in a swanky skyscrapers of international companies, wore suit to work and once a week was shaved, preened, plucked and pomaded by Mustafa at the barber's shop just down the street from my flat. Almost a decade on and swapping the crowded metropolis of Istanbul for the more sedaate pace of rural Cornwall, it's been some time since I went anywhere near a cut-throat razor. So it's with nostalgic anticipation that I head towards the old fishing port of Looe on south coasr to meet up with Denis and Sally Marsh who have invited me to their barber's shop near the harbour for an hour of shaving cream and hot towels.

On a typically misty Cornish autumn morning I swing open the door of the Guildhall Barbers, tucked away on the street that leads down to the town's beach. I'm hit by the heady scent of cloves. "That's Bay Rum," says Denis. "It's a traditional cologne from the West Indies." And traition is certainley the theme here. The small shop is packed with memorabilia from the 1950s and '60s; boxing posters featuring Muhammed Ali, action men dangling off the walls. The golden age of Barbering? I was about to find out.

Denis sits me in the retro chrome and leather chair and starts to explain what is going to happen. He reels off the long list of procedures that my somewhat lethargic "morning face" was about to undergo and promises I'll look ten years younger. He presses a lever and the chair tilts back.

I'd left a few days' growth so that Denis would have something to work with. First up is the face wash, to soften the bristles of my beard. Then comes the first steaming hot towel, and my faceis wrapped up Egyptian mummy-like. Already it would be quite easy to doze off in the cosy warmth but as the towel cools down, I can hear Denis mixing up the lather and it's time for the cut-throat. Not scary, shiny, long blade of yesteryear (health and safety dicate something less unwieldy) but a compact disposable razor that Denis weaves around my face lifting off my bristles in expert fashion.

I try to glance in the mirror to see how many years have fallen off so far, but don't get the chance as Denis envelopes my face with another hot towel. So in a muffled voice I ask Sally and Denis how they came to open a barber's shop in Looe. Originally from Manchester the couple and their young daughter moved to the town 14 years ago via, Australia where they had lived for just over 10 years. "I had always wanted to open a traditional barber's shop" says Sally, who has been a hairdresser since she was 18. "When this location came up for rent six years ago, I knew it would be perfect."

Opening the shop, Sally initially worked by herself but soon needed someone to take on the job of wet shaving, a special service she wanted to offer her customers. So Denis, who was working as a plasterer at the time, made a life-changing desision and went on to study hairdressing and joined Sally in the shop. As Denis lathers me up again, I can see where his plastering skills comes in handy, as the razor deftly goes in for the final close shave.

By this stage, feeling quite chiiled and lying back in the chair, I want to find out what kind of men visit the shop for this kind of pampering. "We do get the occasional weather-ravaged fishman who's been at sea for a month with skin thst needs attention," laughs Sally, "Also, holidaymakers call in for a treat, as it's a novel experience they can't always find where they live; and we get quite a few grooms and their best men coming in for some early morning downtime on the big day."

"These days, men take much more pride in their grooming," says Denis. "They're not afraid to moisturise, and supermarket shelves are full of cosmetics that just didn't exist for men when our dads were young." I agree - when I was a child, the only nod to male grooming in our houde was a suspicious looking bottle of green liquid which purported to be aftershave. It evaporated more than it got used.

But of course Cornwall is no stranger to good barbering and soft skin. Back in the 18th century, Mevagissey boy Andrew Pears - you can guess where this is going - went to London in true Dick Whittington style to seek hid fortune.

After an apprenticeship wielding the cut-throat, he opened his own barber's shop in Soho where patented a mild, translucent soap as a natural alternative to the harsh and abrasive products that were available at this time, Pears Soap is still huge international brand.

Half and hour into the shave, I get the cold towel treatment to cool the skin, followed by a face massage with gentle moisturisers. Finally, I'm ready for the big reveal. Do I look ten years younger? The consensus of opinion is that I definitely look better without my feeble excuse of a beard, there is a glow to my skin making me look much perkier than I usally do and I feel really, really relaxed.

Guys, I say: make some time for a real shave. It really is a thing that a gentleman should have done at least once a month. And ladies: treat your boyfriend, dad, son or husband.

Sally and Denis offer gift vouchers to be used in their shop that make brilliant presents for birthdays, Valentine's and Father's Day. 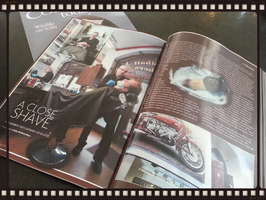 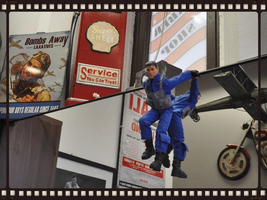 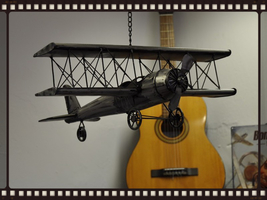 We are located at:

Under the Town Clock

If you have any queries or wish to make an appointment, please contact us:

Get social with us.